An Angel Mom, whose son was killed by an illegal alien, recently shared her thoughts about U.S. border security in the wake of her young son’s tragic death.

“I felt strongly about it right away” Cameo Robinson said. “Because I felt that the undocumented immigrant was given better treatment than the citizen of the United States [my son].”

Last September, Jamar Beach, a 27-year-old resident of Raleigh, North Carolina was leaving his new job and heading home to his infant 2 year old son and fiancée when a van crossed the intersection and hit him while on his motorcycle.

The van was driven by an illegal alien, Neri Cruz-Carmona, 26, who pled guilty and is serving his sentence. He will be released on parole in the summer of 2020, at which point Robinson plans to work closely with ICE to get him removed from the country. She remains unsure whether Cruz-Carmona would be able to return through the same illegal means that he used to come into the country in the first place.

Robinson gave a speech to a biker’s crowd in Raleigh, to celebrate the month of Beach’s birthday, where I interviewed her. She united the community in a vigil on the intersection of the streets where her son was killed by an illegal alien.

Robinson said that foreign policy and a full revamping of our political system might be required since, so many illegal aliens from the chaos that our immigration system is in. She also noted that illegal aliens break other America laws – other than the ones at Southern border – in order to sustain their way of life, including driving without a license, which was the case of the man responsible for the death of her son.

The topic of illegal immigration has gathered attention over the past few months, with a study from Yale University showing 22 million illegals living in the United States undocumented and unvetted. Among the possible solutions for this issue, Trump has been pushing for immigration reform and to build a wall. Robinson, too, thinks a wall should be built, but believes that there is more that needs to be done to stop the influx of people coming through our southern border.

“Yes, we do need a wall, but we also need other laws.” 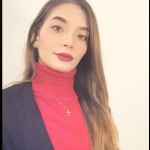 Julia Song is a political activist and commentator. Featured on OANN, The Rebel Media and several other outlets, she has a long experience and background in politics. From a young age she joined movements in her home country of Brazil against the Socialist government. Julia now lives in the USA in the state of North Carolina and has been engaged with local and national politics since 2016, vowing to help raise awareness about damaging policies she experienced in Brazil and how America can avoid following the same path.